One of my readers, Hannah VW., traveled to Italy and used cloth diapers (flats) while she was there. She wrote the following guest post about her experience!

I’m Hannah VW and I’ve been using cloth diapers for our 21-month old son since he was born. We’re expecting another little one in November 2011 and are excited to cloth diaper him or her as well. I keep busy with being a mom and teaching piano and violin lessons. My family recently had the exciting opportunity of traveling to Italy for a month with my husband’s co-workers and their families. After a few days of traveling and touring in Rome, we settled down in a cute little town called Petritoli near the Adriatic Sea. I used disposables for the flights and the days in Rome, but I packed cloth diapers to use during our 3 weeks in Petritoli, as well as day trips we took from Petritoli. I used one package of 36 disposables over the course of the trip, with a few left over at the end of the trip. 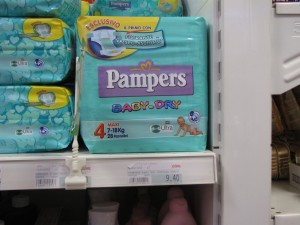 I made the decision to use mainly cloth on the trip for many of the same reasons I use them at home. Buying diapers in the local grocery store in Petritoli would have cost over 40 US cents per diaper because of the exchange rate. Add in wipes, and it would have been pricey. The money we could have spent on disposable diapers got spent on more exciting little extras like gelato, sightseeing, and souvenirs. I was also happy not to leave any extra trash in Italy, especially since reducing trash seemed to be a priority in the town we stayed at (there were recycling bins for metal, glass, paper, and all other recyclables). 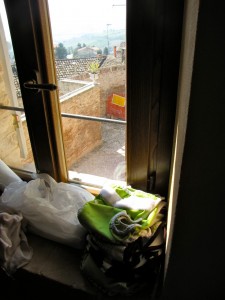 At home I mostly use covers and prefolds, but since I knew I would not have a dryer and was unsure about what the washing machine would be like, I packed mainly flats and covers. I borrowed some flats from a friend in addition to my own to make sure I had enough for 18 changes (2 flats per change). I also packed cloth wipes, 2 pocket diapers, a swim diaper, flushable diaper liners, a large and small wet bag, and a small tub of Country Save detergent. I don’t regularly use flushable liners at home, but it was definitely worth taking them on this trip! I was also happy that I brought detergent, as all the locally available detergents were scented and most had added softeners. I was satisfied with what I took along and everything was useful: we used the swim diaper in the pool, and the pocket diapers were nice and simple to send with my husband when he would do a diaper change in a restaurant bathroom. Our second night in Petritoli my son and I woke up with the nasty flu bug that was circulating among our group. It was followed by a few days of diarrhea for my son. Amazingly, the cloth diapers contained all but one blowout, and I was able to better monitor how much he was wetting compared to normal, because I was using the diapers I was used to. It was during the 3 or 4 days after the diarrhea (as things were transitioning back to normal) that I was most thankful for the flushable liners!

Washing was similar to home: cold rinse, hot wash, extra rinse. Google Translate helped me make sure I was pressing the right buttons! The washer I used there was a front-loader, so I usually added a pot or two of extra water through the detergent opening, just in case. The diapers seemed to come out clean no matter if I added the extra water or not. I dried the diapers on a drying rack or any available fences or railings. During our illness, I turned the heat up on the washer from 60 degrees to 90, thinking it would help clean up the mess and sanitize things, forgetting how hot 90 degrees Celsius is. It curled the velcro a bit on my Best Bottoms shell, and turned the inside of the Kawaii pocket diaper decidedly less soft. My Thirsties and Bummis covers and BumGenius pocket diaper seemed unaffected. If you are considering taking an extended trip with cloth diapers, I highly recommend finding out as much as you can about the laundry facilities, using flushable liners, and taking your own detergent along. As far as what type of diapers to take, it probably depends what you normally use and what the laundry facilities are like, but you really can’t go wrong with flats and covers because they wash and dry easily and don’t take up as much space as other types of diapers. Good luck with your travel planning!

Maria
Maria is an aspiring "fit mom" of 3 children, writing about cloth diapers, going green, and her life as a single mom. Maria works with many companies within the cloth diaper industry and beyond, providing social media management, product development, and other services.
Website
4 Comments