Ok that’s not really true. It bothers me a lot what people think of me since my son still sleeps in a crib at 4 years old. When my mother in law watched the kids overnight for the first time in January (so we could go to a wedding), it was embarrassing. I know people probably think that I’m trying to “keep him a baby,” but that couldn’t be further from the truth. So, here’s why I’m trying not to care what you think about it.

We only transitioned to the crib less than two years ago and it’s all he’s ever known aside from co-sleeping. It’s familiar to him and it’s comfortable to him. How would you feel if someone tried to take away your bed and force you to sleep in something totally different and new?

We bought him his “big boy bed” and involved him in choosing the sheets and comforter. We’ve encouraged him to just try sleeping in it, telling him he’s a “big boy” now. We’ve tried suggesting that we at least take the front of his crib off so he can use it as a toddler bed and get in and out himself. No go. He’s not interested.

He said “how would I listen to my music?” I told him we’d move his soother (aff link) to the other side or his nightstand. What about my blanket? We’ll move that too. Nope, he said he was going to sleep in his crib forever, even when he’s a grownup.

He knows that he could get hurt if he climbed in or out of it and that if he did, we’d take the front off, no questions asked. So what is it really hurting to let him continue to sleep in it until he is ready? I’m sure one day he’ll wake up and decide he wants to sleep in his big boy bed and I will miss hearing him calling “Mommy” in the morning.

At every turn it seems like we’re pushing our kids to grow up. We’re still working on him dressing himself, cleaning up after himself and writing his name. For now he can keep this one thing that gives him comfort, even if people think I’m trying to keep him a baby by letting him.

I find myself internalizing the judgement of others (whether spoken or unspoken, real or imagined) and allowing that to flavor my parenting. I worry if I am hovering too much or not enough at the park. Not because I think anything will happen to them but because I don’t care for judgmental looks from moms at either end of the spectrum.

I worry about allowing my kids to play in the backyard while I watch from the kitchen window. Not because I think they will get hurt or wander from the fenced yard while I do dishes, but because I worry some nosy person will call the police. It’s the same reason I don’t like to let my 6 year-old wear his favorite gray pants with a hole in the knee and why it bugs me that my daughter wants to wear the same sweatshirt over and over. I don’t want people to think they don’t have clothing. Not for their sake, but my own. I don’t want anyone to think I’m a terrible mother. I shouldn’t be parenting based on what others think, I should be parenting based on what my children need.

So, my 4-year old still sleeps in a crib, and I do care what you think, but I’m trying not to. For his sake. 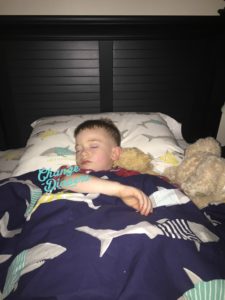 Maria
Maria is an aspiring "fit mom" of 3 children, writing about cloth diapers, going green, and her life as a single mom. Maria works with many companies within the cloth diaper industry and beyond, providing social media management, product development, and other services.
Website
24 Comments